The Time I Recommended Yammer

Yammer is often the forgotten piece of Microsoft 365. Some people would even argue that Microsoft has largely forgotten about it. It’s an enterprise social network. It feels a lot like using Facebook, but it’s restricted to your organization.

Several years ago I was tasked with planning an intranet based on SharePoint. A significant portion of the goal was to further enhance communication across the organization, including more casual conversations and not just strictly work conversations. The assumption going in was that SharePoint was the solution for that as well as sharing resource files.

Note that this was not long before modern SharePoint began. It was mostly ugly. The conversation web part sucked. It was quite functional for managing files, but was not a pleasant experience. I realized that no, SharePoint is not the solution for everything.

But I discovered another part of Microsoft 365: Yammer. Yammer was a perfect solution for what we needed in terms of easy communication. I pitched it to the ultimate decision-maker and at first she was a little tentative to commit to a second app, but she came around to realizing my point.

The graphic I’m including below is a newer depiction from Microsoft that helps capture the same idea: 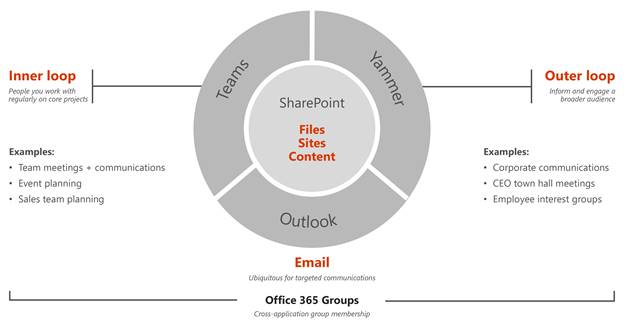 Teams is great for the inner loop: the conversations you have with your core teams regularly. Outlook is the ubiquitous targeted communication tool: everyone has email and it’s a good failsafe especially for communication outside your organization. SharePoint is the file system underneath it all, which you may or may not browse directly. And Yammer is the outer loop, great for all-staff and more casual communication.

So, would I still recommend Yammer? In some circumstances, yes. Some things have changed since then, like the introduction and centrality of Teams to take up that “inner loop.” But Yammer, while not the most complete tool in the world, is still good for the same thing I recommended it for all those years ago: the “outer loop” user-friendly open conversations across a wide organization.

What Goes Where? The first question to consider when planning a file structure in Microsoft 365 is what files go where. That’s more complicated in an online cloud collaboration system than it is f...

Microsoft Search may be the most underrated feature available as part of Microsoft 365. Maybe that’s because Microsoft themselves haven’t been promoting it that heavily, or maybe it’s because it is...